Blue light phototherapy Radiometer for measuring the irradiation intensity in the treatment of non-conjugated hyperbilirubinemia in newborns.
CSS-45 with CSS-D

Blue light phototherapy is the most common therapeutic intervention used for the treatment of unconjugated neonatal hyperbilirubinemia.

The effectiveness of phototherapy is influenced by several parameters. These include the light spectrum, the distance between the light source and the exposed surface, the irradiation intensity, the exposed surface area and the irradiation time. Light in the spectral range of approximately 400 nm to 500 nm, with a peak at 460 nm ± 10 nm, is considered the most effective for the treatment of hyperbilirubinemia.

As light sources age, their radiation intensity usually decreases with the number of operating hours. For this reason, it is common practice for the light intensity of phototherapy devices to be measured at routine intervals either by clinicians or specialist technicians.

Not every light source ages the same

This periodic control requires predictable aging behavior of each individual lamp. If a light source ages faster, there is a risk of too low an irradiation dose resulting in extended or ineffective treatment.

In the UK for example, the latest guidelines used by the National Health Service (NHS) as issued by NICE (National Institute for Excellence in Health and Care) now recommend the measurement of irradiation intensity prior to each therapeutic treatment.

There are different measurement methods for the irradiation intensity that have arisen historically.

Manufacturers within Europe are required to test blue light phototherapy lamps in accordance with IEC 60601-2-50: 2009 + A1: 2016. This standard specifies total irradiance for bilirubin, Ebi, defined as the integrated irradiance over the spectral range 400 nm to 550 nm and is displayed in mW / cm².

However, within hospitals the average spectral irradiance appears to be the most commonly used measure, but the wavelength over which it is determined can vary between different equipment suppliers. The latest recommendation from the American Academy of Pediatrics (AAP), issued 2011, specifies an average irradiance of at least 30 μW / cm² / nm measured over the range from 460 nm to 490 nm. Previous AAP guidelines (2004) specified a broader wavelength range from 430 nm to 490 nm which is still widely used by many manufacturers and clinical practitioners. Some leading manufacturers specify alternative wavelength ranges. For example, average irradiance over the range from 420 nm to 500 nm is often stated.

The latest AAP guidance also states that irradiance levels of greater than 60 μW / cm² / nm should be avoided.

Broadband light measuring devices (radiometers) are constructed with a detector whose broadband spectral sensitivity is adapted to the AAP or IEC specifications by means of optical filters. This relatively simple technique is characterized by relatively large spectral sensitivity tolerances. This often manifests itself in large measurement deviations when lamps of different manufacturers and technologies (fluorescent tubes, LEDs) are measured with such a measuring device. Therefore, the use of broadband light meters is often limited to a particular model of a phototherapy device.

Spectral light measuring devices (spectroradiometers) are constructed with a spectral detector, which measures the spectral distribution of the irradiation intensity. From the measured spectral data, the averaged or integral irradiance is calculated. Spectral light meters offer precise measurement results regardless of the emission spectrum of the lamps. Due to the increasing miniaturization of the spectral detectors, this precise and modern technology can also be used in handheld instruments. For the technically interested user these meters also provide information about the emission spectrum of the light sources.

The expectation of calibrated measuring devices is that their measurements will correspond to those of National Metrological Institutes (NMI). This requires traceability to NMI standards.

Accredited calibration and testing laboratories must increasingly prove that their measuring equipment has been tested by a test laboratory accredited to DIN EN ISO / IEC 17025 in order to ensure the traceability of their measured values.

The CSS-45-Bili is a compact spectral light meter for measuring irradiation intensity in blue light phototherapy. The meter is designed to measure the average and integrated irradiance. It does not require correction values ​​for different phototherapy systems. It is operated with the CSS-D display unit. It may also be used in conjunction with a laptop or notebook without the CSS-D.

The meter provides individual display screens for each of the following metrics:

Displays including spectral power distribution graphs are also available for each of the above bilirubin measures. The user can configure the meter to display only the required display screens.

Its handling is intuitive and is done via the color touch screen display. The battery, designed for a full working day, can be charged with common USB chargers. 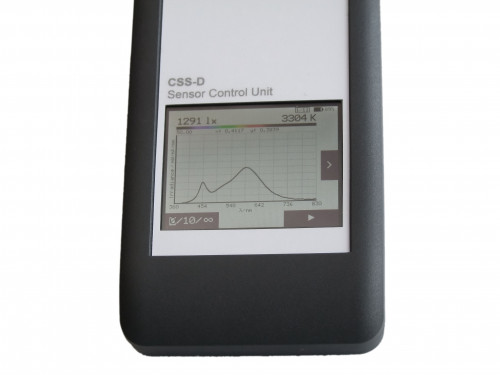 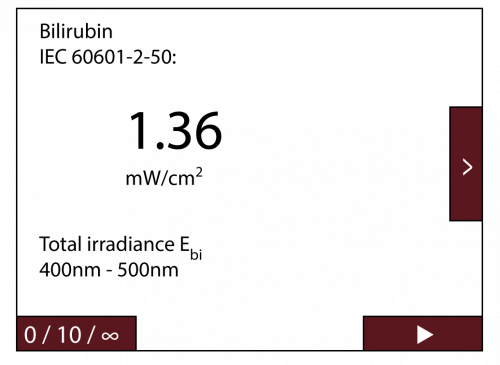 Alphanumeric representation of the measured values at example of the IEC 60601-2-50 guideline. Graphical and alphanumeric representation of the measured values at the example of the IEC 60601-2-50 guideline.

Blue light phototherapy Radiometer for measuring the irradiation intensity in the treatment of non-conjugated hyperbilirubinemia in newborns.
CSS-45 with CSS-D