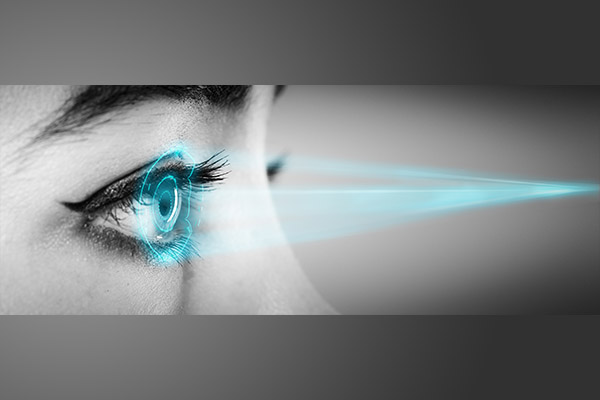 The potential effects of the blue light content within display devices and lighting has been a subject of particular interest and concern, particularly since the widespread introduction of solid-state lighting.  ‘Blue light hazard’ refers to a specific photobiological hazard concerned with the possibility of photochemical-induced damage to the retina within the eye (photoretinitis). It is not concerned with the possible disruption to circadian rhythms, for example (see Human Centric Lighting application).

Only radiation that passes through the cornea of the eye and is imaged on the retina is relevant for blue light hazard assessment. Understanding the appropriate standards and the necessary measurement techniques can appear somewhat daunting at first.

ICNIRP guidelines [1] form the basis of non-coherent optical radiation exposure limits in most standards and regulations. The blue light hazard function is actually defined over the 300nm - 700nm wavelength range, but with a strong responsivity peak in the blue region. Hence, high power phosphor conversion LEDs with their relatively intense blue emission peak compared to other lighting technologies, have been a particular concern. 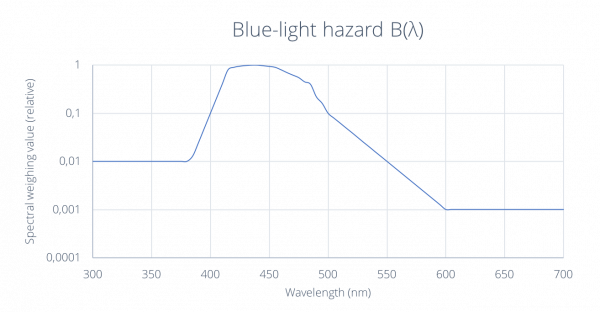 The size of the pupil defines the solid angle over which the eye projects an image onto the retina.

Therefore, the brightness (luminance) of the source is the important criteria for determining the irradiance level on the retina. Standards specify limits for blue light exposure in terms of radiance (Wm-2sr-1) within defined field of views and weighted by the blue light hazard function. Due to the natural rapid movement of the eye (saccades), the retinal irradiance decreases with time, a fact that is incorporated within the relevant standards.

Lighting products manufactured within and imported into Europe must conform to the Low Voltage Directive (LVD) 2014/35/EU in order to be CE marked.  For luminaires this requires compliance with EN 60598-1 [2],the general requirements standard for luminaires, which includes photobiological safety testing. Since 2006 photobiological safety testing of lamps and lighting products has been addressed by the horizontal standard IEC 62471 [3]which includes six hazard functions over the 200-3000nm wavelength range. However, for most general lighting products such comprehensive testing is unnecessarily onerous and hence IEC TR 62778 [4] is referenced in vertical product standards for the assessment of retinal blue light hazard.  Within IEC TR 62778 an assessment is made whether a luminaire exceeds the limits of IEC 62471 risk group 1 (RG1) at a distance of 200mm. Sources with luminance of <10000 cd/m2 are RG0 and require no further testing. Blue light weighted radiance needs to be measured in an 11mrad FOV for sources of size >=2.2mm whereas smaller sources only require irradiance measurement. The X1-3 Optometer in conjunction with the XD-45-HB blue light hazard detector facilitates these measurement requirements of IEC TR 62778.

For products not covered under the LVD, the prevention of blue light hazard remains a legal requirement under the General Product Safety Directive (GPSD) 2001/95/EC.

Blue light hazard assessment is also a requirement within health and safety at work legislation. The EU artificial optical radiation directive (AORD) [5], imposes limits on worker exposure to non-laser sources of optical radiation. The AORD exposure limits are consistent with those of EN 62471 [6].