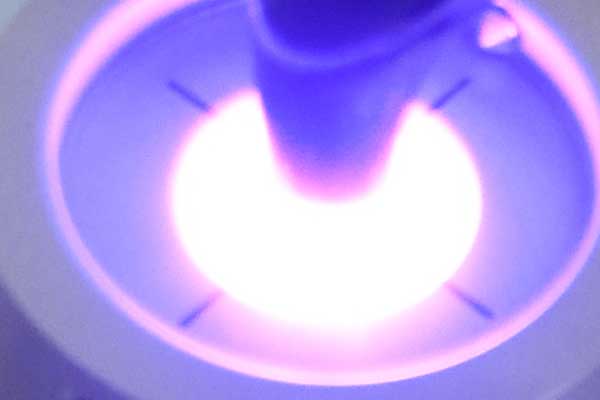 UV LED lamps are being enthusiastically developed and adopted as alternatives to the medium pressure mercury lamps traditionally used for UV curing processes. UV LED curing offers several potential advantages including reduced power consumption, less heat generation, instant switching, longer lifetimes, as well as the environmental benefit of being mercury-free. UV radiometers are widely used to monitor and control the UV exposure (or ‘dose’) from high-intensity gas discharge lamps on work surfaces. However, UV LED devices emit a narrow spectrum of radiation (typically ±10 nm), whereas mercury lamps have a much broader spectral distribution. This has significant implications for the design and calibration of radiometers if they are to be suitable for measuring the irradiance of UV LED curing equipment.

The UV radiometers produced by Gigahertz-Optik GmbH generally have a broadband spectral responsivity function resulting from the combined characteristics of the photo-detector and filter.

This technology does not permit the design of a detector that has a perfectly ‘flat’ radiometric function over its entire spectral range. Variations in responsivity at different LED wavelengths would result in deviations in the measurement values ​​of irradiance for LEDs of different wavelengths. 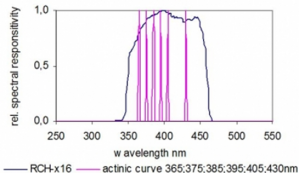 Our accredited calibration laboratory for optical radiation measurements calibrates the radiometers for UV LEDs at these typical LED wavelengths using CIE 220: 2016 [1] recommendations. The UV radiometer, consisting of the RCH-116 measuring head and the X1-1 optometer, has proven itself over an ever increasing range of industrial applications.