This Product is discontinued, please refer to the Alternatives shown below under Similar Products or contact us directly.

Alternative Products for this discontinued product:

Rail-bench to extend the LCRT-2005H-S use to evaluate thin samples transmission by diffuse and regular illumination. Features: stable 1m length rail bench with stand for source and receiver. Carriage with sample holder.

The LCRT-2005H-S incorporates a manually selected light trap that allows the measurement of haze according to ASTM D1003 − 13. The meter supports the measurement by intuitive display commands.

The LCRT-2005H-S has a D/0 measurement setup that corresponds to the Helmholtz reciprocity principle for reversibility of the radiation beam and that offers an alternative to the 0/D measurement geometry. The scattered proportion of the transmission can not be measured directly when using the LCRT-2005-S. This applies the principle where the entire transmittance is measured for diffuse illumination of thin samples whereas direct transmittance is measured for parallel illumination. The difference of these two values gives the diffuse proportion of the transmittance. Switching from diffuse to directed illumination is done by respectively setting the distance between the sample and the light source. The B2S-75-TRTH rail bench has an moveable sample holder that can be used to vary the distance between the light source and the sample.

The LCRT-2005H-S can also be used as a spectrophotometer due to its spectral measurement detectors in source and receiver. The spectral range is between 380 nm to 780 nm.

The LCRT-2005H-S can be used either with or without the B2S-40-TRTH optical bench and is hence suitable for a wide range of applications.

The USB interface enables data readout and power supply. The software delivered with the device can be used for measurement data readout. 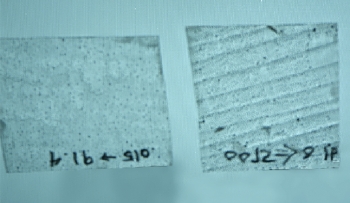 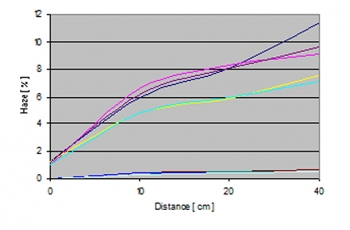 Scattered transmittance (Haze) of a scratched sample and clear sample as a function of the distance between the light source and sample. 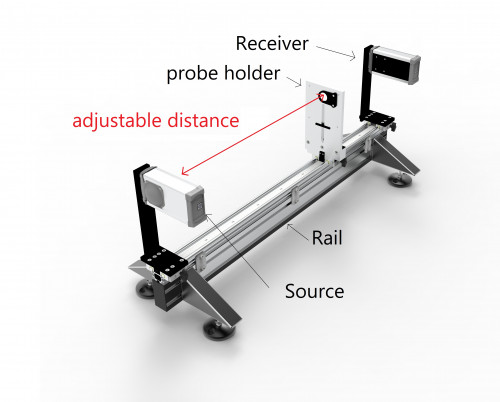