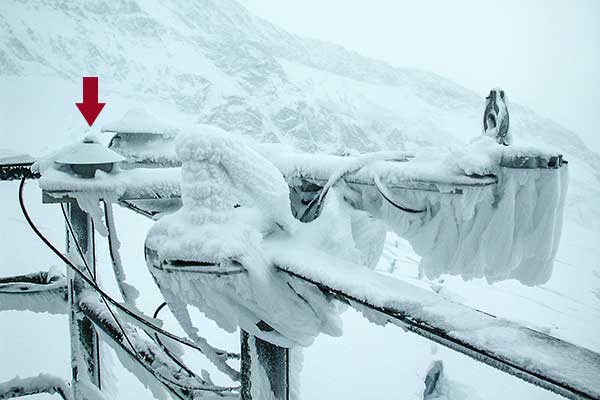 Instrumentation for measuring solar radiation is often subject to extreme climatic conditions as much research is necessarily located high in mountain areas or other hostile environments such as the Arctic and Antarctic regions. For example, the High Altitude Research Station, Jungfraujoch (HSFJG) [1] Switzerland is located 3456 m above sea level. It has been the location for solar radiation measurements with both broadband radiometers and spectroradiometers since the 1980’s. One research project undertaken during the months of October and November investigated whether the broadband device WPD-UVA-03 (Gigahertz-Optik GmbH) was suitable as a monitor detector for relatively slow scanning spectroradiometers such as the Bentham DTM300 double monochromator.

Air temperatures on the Jungfraujoch ranged from + 5 °C to -18 °C with wind speeds of up to 150km/h. In addition, the device had to withstand sporadic icing. Third party comparison work by CMS Schreder concluded that the UV-A broadband meter had sufficient stability even under extreme weather conditions. Thus, it was very well suited as a monitor detector for quality control of spectroradiometers used for global solar radiation. A suitable broadband monitor detector can be used to reduce the inherent measurement uncertainties resulting from the long measuring times of scanning spectroradiometers (typically 2 minutes or more) which are due to short-term events such as passing clouds. 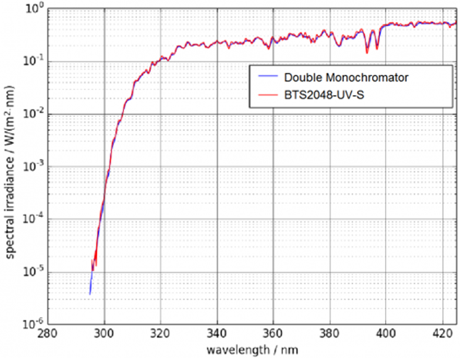 Comparison of solar measurements with BTS2048-UV-S and a double monochromator.