2.2 Spectral sensitivity of an integral detector

Within the normal range of operation of an integral detector, the relation between the input signal (the spectral radiometric quantity to be measured Xλ(λ)) entering the detector and its corresponding output signal Y has to fulfil the following condition of linearity:

In many cases, sm is given by the maximum of s(λ), thus sr(λ) is normalized to a value of 1 in its maximum. Another possibility is the normalization of sr(λ) to a total wavelength integral value 1, which is achieved by the definition of

In terms of relative spectral sensitivity, the detector’s output signal Y is given by

This integral relation is equivalent to the definition of photopic quantities where the detector’s relative spectral sensitivity sr(λ) corresponds to the CIE spectral luminous efficiency function V(λ) and sm corresponds to Km = 683 lm/W. Similarly, the calculation of effective radiation doses relevant for certain biological reactions is based on a corresponding relation containing the respective biological action spectrum. For instance, the erythemal action spectrum is used for definition of Sunburn Unit, which is used for quantification of erythemally active solar UV irradiance (UV radiation).

This correspondence allows for the direct determination of photopic quantities or biologically active radiation using a specially designed integral detector. In particular, the detector’s relative spectral sensitivity sr(λ) has to be matched closely to the CIE spectral luminous efficiency function V(λ) or to the respective action spectrum. For the determination of chromaticity coordinates or correlated color temperature, it is necessary to simultaneously use three detectors with their spectral sensitivities that are specially adapted to the color matching functions defined by the CIE 1931 standard colorimetric observer.

For radiometric characterization of monochromatic or near monochromatic radiation of a known wavelength, a detector’s spectral sensitivity does not necessarily have to match a certain predefined shape. A photodiode can therefore be used without any spectral correction filters as long it is sensitive at the respective wavelength. 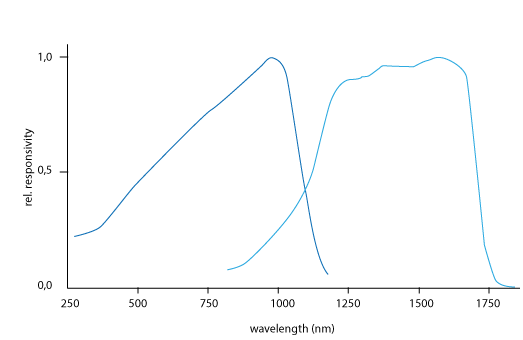 The determination of total radiation power over a certain spectral range requires the detector’s spectral sensitivity function to closely match a rectangular shape. 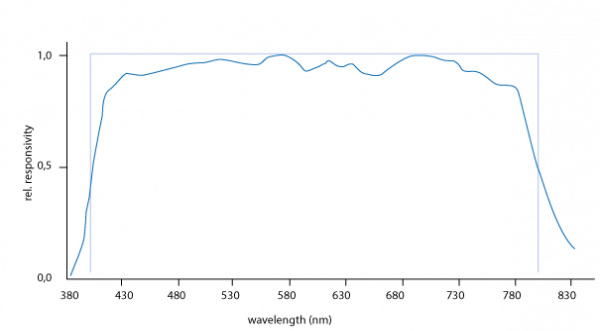 Gigahertz Optik offers absolutely calibrated irradiance and radiant power meters equipped with a cosine diffuser or an integrating sphere whose spectral sensitivity is optimized for UVA, UVB, UVC as well as visible (VIS) and near infrared (NIR) ranges.

For photometric measurements, the detector’s relative spectral sensitivity sr(λ) has to match the CIE spectral luminous efficiency function V(λ) as close as possible. In order to quantify a detector’s inevitable spectral mismatch, the CIE recommends the evaluation index f1', which is defined by

where s*r(λ) is given by

where SA(λ) is the spectral distribution of the CIE Standard Illuminant A, which is the recommended photometric calibration source. High quality photometric detectors show a value of f1' below 3 %, whereas a value of f1' above 8 % isconsidered as poor quality. The DIN 5032, part 7 requires a spectral mismatch of f1' ≤ 3 % for “Class A” instruments and f1' ≤ 6 % for “Class B” instruments. Gigahertz Optik offers high quality illuminance, luminance and luminous flux detectors corresponding to Class A level (f1' = 3 %) and, as an economical alternative, detectors meeting class B level (f1' = 5 %). Furthermore, the BTS Technology allows for an online correction of the spectral mismatch factor.

For the determination of a color stimulus X, Y and Z values as defined by the CIE 1931 standard colorimetric observer, the same stimulus has to be measured by three different detectors, whose spectral sensitivity functions have to be adapted to the CIE 1931 XYZ color matching functions. However, as the x(λ) color matching function consists of two separate sensitivity regions, the X value is often determined by two detectors. In this case, all four detectors are needed for the determination of the X, Y and Z stimulus values. Since the color matching function y(λ) is identical to the CIE spectral luminous efficiency function V(λ), the respective detector can be calibrated definitely for simultaneous photometric measurements. 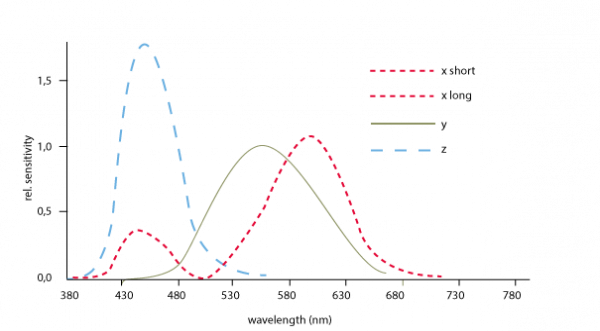