1.11 Defining properties of a spectral line

The peak wavelength of an LED is typically described by a series of physical quantities. It should be noted that in case of a symmetric line spectrum, the centroid, peak and center wavelengths are identical since they coincide. Only the full width at half maximum value (FWHM) gives differing information.

High quality measuring devices provide these spectral line evaluations information either in the application software, software development kit or directly on the display in the case of mobile measuring devices like spectral luxmeter. Of course a proper and accurate implementation of the mathematical analysis is important. This spectral analysis is becoming increasingly important, especially in LED measurement technology. 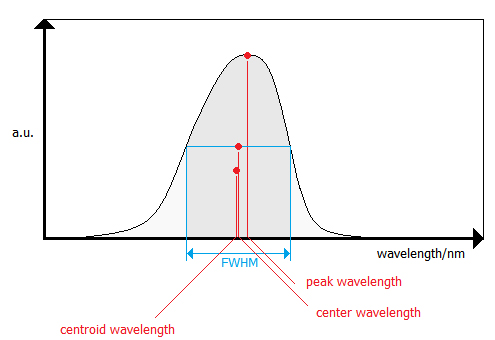