According to DIN 5031, the term “optical radiation” refers to electromagnetic radiation in the wavelength range between 100 nm and 1 mm. The terms “light” and “visible radiation” (VIS) refer to the wavelength range between 360 nm and 830 nm, which can be perceived by the human eye. Optical radiation with wavelengths shorter than 400 nm is called ultraviolet (UV) radiation and is further subdivided in UV-A, UV-B and UV-C ranges. Optical radiation with wavelengths longer than 830 nm is called infrared radiation (IR) and is similarly divided into IR-A, IR-B and IR-C. Also NIR is sometimes used. Devices to perform spectrally resolved optical radiation measurements are called spectrometers in general terms. If calibrated to radiometric units, they are referred to as spectroradiometers. 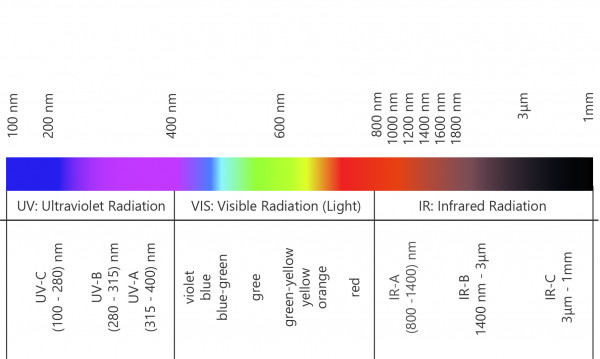 It must be emphasized that this classification of electromagnetic radiation is a matter of convention and is not based on qualitative properties of the electromagnetic wave itself. Instead, it is largely motivated by the effects of the electromagnetic wave on matter. For instance, the UV-B range covers the wavelengths in the solar spectrum which is particularly responsible for DNA damage that causes melanoma and other types of skin cancer. Since the strength of radiation effects on matter does not change abruptly with wavelength, different authors define UVA and UVB ranges slightly different. For example, the US Food and Drug Administration (FDA) and the US Environmental Protection Agency (EPA) define the UV-A range as being between 320 nm and 400 nm. This is different from the definition by two of the main standardization authorities, the CIE and DIN, who define the UVA range as being between 315 nm and 400 nm.

Spectral sensitivity functions such as the CIE photopic response have also been defined in other biological effects of optical radiation, e. g. DNA damage, formation of erythema (sunburn) and of non-melanoma skin cancer, tanning of the human skin and the photosynthesis process in green plants, which have been studied and quantified by spectral sensitivity. Particularly with respect to certain biological reactions, the term “action spectrum” is often used instead of “spectral sensitivity”. See for instance applications like hazard measurements or measurement of PAR (Photocynthetically Active Radiation). 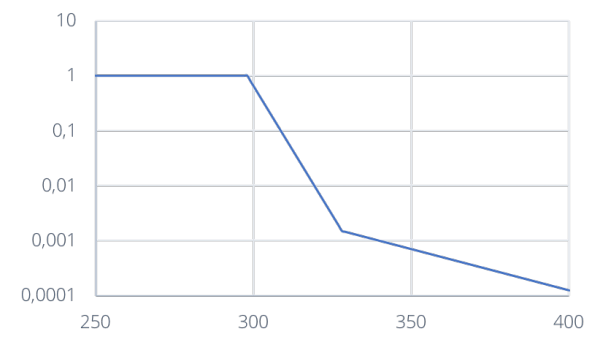