The whole discipline of optical measurement techniques can be roughly subdivided into photometry and radiometry. Whereas photometry focuses on determining optical quantities that are closely related to the sensitivity of the human eye, radiometry deals with the measurement of energy per time (= power, given in watts) emitted by light sources or impinging on a particular surface. Thus, the units of all radiometric quantities are based on watts (W). According to CIE regulations, symbols for radiometric quantities are denoted with the subscript “e” for “energy”. Similarly, radiometric quantities given as a function of wavelength are labelled with the prefix “spectral” and the subscript “λ” (for example spectral radiant power Φλ).

Since the area A is proportional to r², this fraction is independent of the actual choice of r.

If we want to calculate the solid angle determined by a cone (as shown in fig. 1) area A is the area of a spherical calotte. However, area A can have any arbitrary shape on the sphere’s surface because the solid angle is only defined for conical parts of the full visual field.

Although Ω is dimensionless, it is common to use the unit steradian (sr). The observer’s total visual field is described by the whole surface of the sphere, which is given by 4πr², and thus covers the solid angle 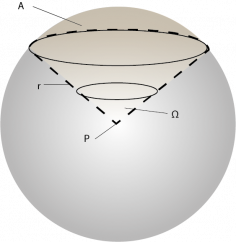 Fig. 1: The solid angle Ω quantifies a certain part of the visual field seen by an observer located at P

Radiant power Φe is defined as the total power of radiation emitted by a source (lamp, light emitting diode, etc.), transmitted through a surface, or impinging upon a surface. Radiant power is measured in watts (W). The definitions of all other radiometric quantities are based on radiant power. If a light source emits uniformly in all directions, it is called an isotropic light source.

Radiant power characterizes the output of a source of electromagnetic radiation only by a single number and does not contain any information on the spectral distribution or the directional distribution of the lamp output. 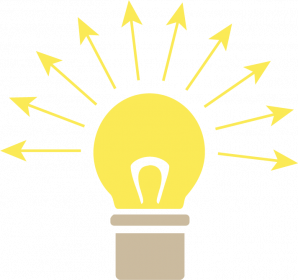 Fig. 2: The radiant power (Φe) of a light source is given by its total emitted radiation 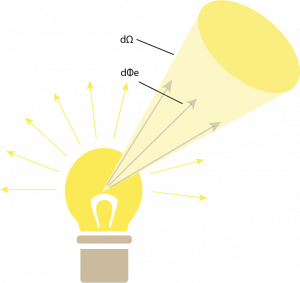 The radiance Le is the intensity of optical radiation emitted or reflected from a certain location on an emitting or reflecting surface in a particular direction (the CIE definition of radiance is more general. This tutorial focuses on the most relevant radiance application describing the spatial emission characteristics of a source). The radiant power dΦe emitted by a (differential) surface element dA in the direction of the (differential) solid angle element dΩ is given by

In this relation, ϑ is the angle between the direction of the solid angle element dΩ and the normal of the emitting or reflecting surface element dA.

whereby ϑ is the angle between the emitting surface element dA and the direction for which Ie is calculated. 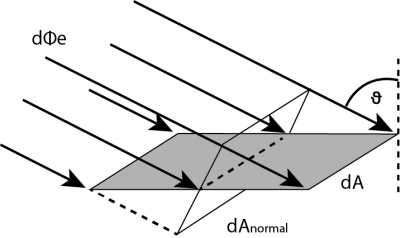 Note that the corresponding area element dAnormal, which is oriented perpendicular to the incident beam, is given by

with ϑ denoting the angle between the beam and the normal of dA, we get

The unit of irradiance is W/m2.

The integration is performed over the solid angle of 2π steradian corresponding to the directions on one side of the surface and ϑ denotes the angle between the respective direction and the surface’s normal.

The unit of radiant exitance is W/m². In some particular cases, Me = Ee (see  “Reflectance ρ, Transmittance τ and Absorptance α” ).

The radiometric quantities discussed above are defined without any regard to the wavelength(s) of the quantified optical radiation. In order to not only quantify the absolute amount of these quantities but also the contribution of light from different wavelengths, it is important to also define the respective spectral quantities.

Mathematically, this can be expressed by the integral

The unit of spectral radiant power is W/nm or W/Å. 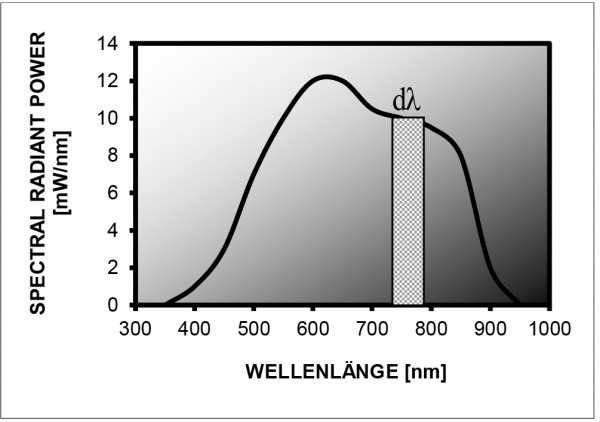 Fig. 5: Relation between spectral radiant power Φλ(λ) and radiant power Φe, visualized  at a hypothetical example.
Radiant power emitted in the wavelength interval between λ  and λ+dλ  is given by the area of the shaded rectangle,
which amounts to Φλ(λ)dλ.  The total amount of radiant power Φe emitted over  the whole spectrum is given
by the area under the curve describing Φλ(λ), which is mathematically expressed by an integral.

Measuring instruments that directly provide the integrated, i.e. not spectrally resolved, radiometric unit are often called integral measuring devices. These in turn are specially optimized for the various applications in their spectral sensitivity as well as design to ideally meet the applications.

Measuring instruments which output the optical radiation spectrally resolved and in radiometric units are called spectral measuring devices or spectroradiometers. These Spectroradiometers are also optimally adapted to the application in their design and specifications.