The basic problem of colorimetry is the quantification of the physiological color perception caused by a certain spectral color stimulus function φλ(λ). When the color of a primary light source has to be characterized, φλ(λ) equals the source’s spectral radiant power Φλ(λ) (or another spectral radiometric quantity, such as radiant intensity or radiance). When the color of a reflecting or transmitting object (for example a filter) has to be characterized, φλ(λ) equals the incident spectral irradiance impinging upon the object’s surface, multiplied by the object’s spectral reflectance, its spectral radiance coefficient or its spectral transmittance. Since colors of reflecting or transmitting objects depend on the object’s illumination, the CIE has defined colorimetric standard illuminants. The CIE Standard Illuminant A is defined by a Planckian blackbody radiator at a temperature of 2856 K, and the CIE Standard Illuminant D56 is representative of average daylight with a correlated color temperature of 6500 K (for the definition of color temperature, see below).

According to the tristimulus theory, every color which can be perceived by the normal-sighted human eye can be described by three numbers that quantify the stimulation of red, green and blue cones. If two color stimuli result in the same values for these three numbers, they produce the same color perception even when their spectral distributions are different. Around 1930, Wright and Guild performed experiments during which observers had to combine light at 435.8 nm, 546.1 nm and 700 nm in such a way that the resulting color perception matched the color perception produced by monochromatic light at a certain wavelength of the visible spectrum. Evaluation of these experiments resulted in the definition of the standardized RGB color matching functions r(λ),  g (λ) and b(λ), which have been transformed into the CIE 1931 XYZ color matching functions x(λ), y (λ) and z(λ). These color matching functions define the CIE 1931 standard colorimetric observer and are valid for an observer’s field of view of 2°. Practically, this observer can be used for any field of view smaller than 4°. For a 10 ° field of view, the CIE specifies another set of color matching functions x10(λ), y10(λ) and z(λ)10. This set defines the CIE 1964 supplementary standard colorimetric observer, which has to be used for fields of view larger than 4 °. 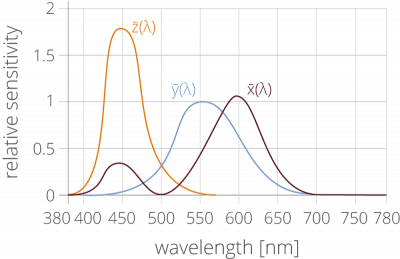 Although RGB and XYZ color matching functions can be equally used to define three parameters where the numbers uniquely describe a certain color perception. The XYZ color matching functions are preferred because they have positive values for all wavelengths (Fig. 1). In addition, y (λ) is equal to the CIE spectral luminous efficiency function V(λ) for photopic vision.

with E(λ) denoting the incident spectral irradiance impinging upon the object’s surface.

Although the XYZ tristimulus values define a three-dimensional color space representing all possible color perceptions, the representation of color in a two-dimensional plane is often sufficient for most applications. One possibility for a twodimensional representation is the CIE 1931 (x, y) chromaticity diagram with its coordinates x and y calculated from a projection of the X, Y and Z values:

Although this definition of the u’ and v’ coordinates does not provide a strict correspondence between geometric distances and perceived color differences, there are far less discrepancies than in the CIE (x, y) chromaticity diagram. 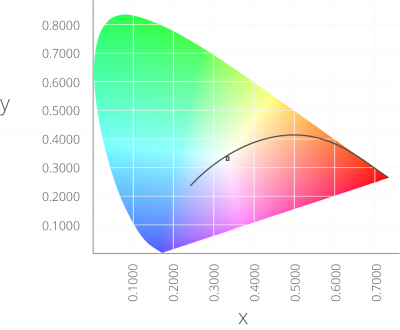 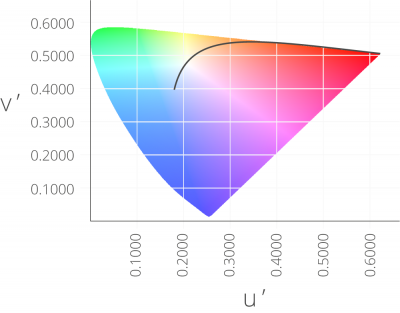 The correlated color temperature is used to characterize the spectral distribution of optical radiation emitted by a light source. This characterization corresponds to the projection of a two-dimensional chromaticity diagram onto a onedimensional scale and is therefore very coarse.

In detail, the correlated color temperature is given in Kelvin (K) and is the temperature of the blackbody (Planckian) radiator whose received color most closely resembles that of a given color stimulus.

where Ri are given by

In addition to the CRI specified by CIE 1976, there are 15 test color samples of the colorquality scale (CQS) that are calculated in a similar way. The CQS method (version 7.5) uses 15 selected (saturated) test colors from the Munsell color system instead of the CIE test color samples. According to the CIE color rendering index, test light sources that increase the saturation of an object’s hue as compared to a reference light source are evaluated with low CRI scores. Unlike the CQS reference light source, the CQS method does not evaluate an increase in saturation of a test device in a negative way in order to take into account an observer’s tendency to prefer colors with a higher saturation. An increased saturation of the color rendition when an object is illuminated by a light source under test means a change in color perception. This again means that there is no conformity of the test light source and the reference thus leading to a decreased CRI score. By definition, the color quality scale is hence no pure color rendition metric. Instead, it is a combination of color preference and rendition metric. Its advantage is that the color preference is taken into account. At the same time, an objective evaluation of color rendition is not possible.

The Planckian locus is a diagrammatic representation of a black body radiator’s emission with respect to the color temperature (see Fig. 5). The dominant wavelength of a radiator

The dominant wavelength of a radiator is determined by the point where a straight line from the white point through the color coordinates of the radiator intersects with the spectral locus, the outer curved boundary of the CIE 1931 color space diagram. This is shown in Figure 6. The dominant wavelength cannot be determined directly from the spectrum. Instead, it represents an evaluation of a light source’s properties based on the color metric. The purity of a radiator

The purity defines how close the color coordinate of a radiator is positioned in relation to the spectral locus in the CIE color space diagram. Geometrically, it can be depicted as shown in Figure 7. 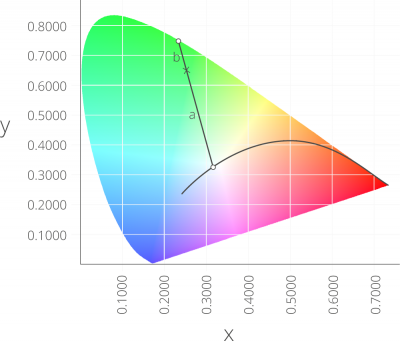 Distances in the xy color space, which was defined in 1931 by CIE, do not reflect the distances as perceived by the human eye. This means that if two measurement points in the color diagram have the same distance to an arbitrary reference point, the perceived color contrast differs in general. In 1942, MacAdam tried to take this into account by adding ellipses into the color diagram as shown in Figure 8. Nowadays, so-called n step MacAdam ellipses are used. Here, n is the magnification of the ellipse in comparison to the one which was originally defined by MacAdam. Established values are 3x, 5x and 10x. 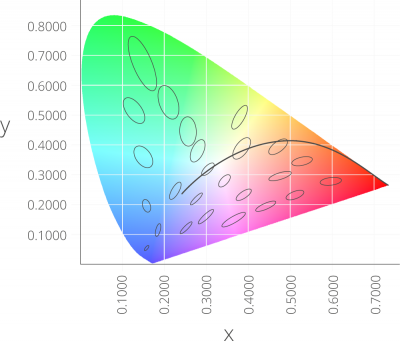 MacAdam’s research presented a huge progress and considering the options at that time in terms of experimental setups and computing power, his results are truly remarkable. In the 1960s, additional research was promoted which resulted in the CIE 1976 u'v' color space. Although the xy color space is the most widely accepted color space to date, CIE recommends using the u'v' color space. 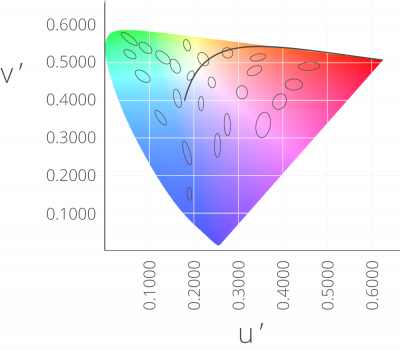 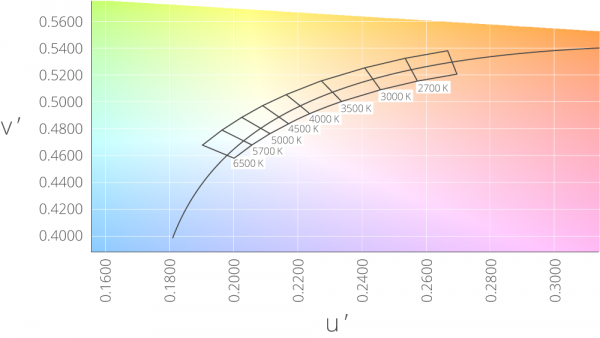 Most recent recommendations by the CIE (IEC 60081, IEC 1997) include the use of n step circles in u'v' color space with their centers at the position of the MacAdam ellipses. The radius of these circles can be adjusted as required. Their mathematical description is given by:

where u'C and v'C are their centre coordinates. With such a description, interpolation in terms of CCT becomes an option which reflects the diversity of LED technology. For binning purposes, either these or customized areas defined by the manufacturers are used in the selection and sorting of LEDs based on specific color properties. Such measurements require precise spectrometers that have a high wavelength precision, narrow optical bandwidth (or a bandwidth correction) and a verified absolute calibration. Additionally, highly sensitive devices that enable rapid measurements and fast data transfers are required. For a measurement device to be used in LED binning, it must meet these speed and precision requirements. Figure 11 shows the color bins of a LED manufacturer in the u'v' color space.